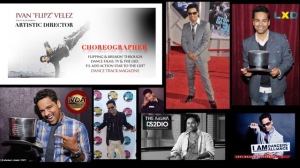 FLIPZ is nominated for a World Dance award for choreographing MJ ONE, Billy Jean for Cirque Soleil.

It’s been quite a journey for Ivan “Flipz” Velez.  An actor, a choreographer, manager, and producer,he is a World famous B-boy who started his career as a dancer and stunt performer in such movies like “You Got Served”, the movie that actually launched his dance career, “Honey,” “Stomp the Yard,” “Step Up 3D” and the movie that defined what being a B-Boy is all about, “Battle of the Year”. Velez also helped star Chris Brown get ready for this movie and the strenuous and precision dance style of the B-Boys. Some of the world’s best B-Boys were in Battle of the Year, so Chris Brown had to be up to snuff..and thanks to Flipz, he was.

Now Velez is conquering the world of television as associate supervising choreographer on Tru TV’s newest show, Fake Off . Fake Off will feature 10 teams from around the country competing against each other in the amazing art of “Faking”. Faking is a mixture of theater, black light, illusion and acrobatics. Each team will re-imagine, in their own style iconic moments in pop culture. The judges for Fake Off will be the best of the best. Rozonda “Chilli” Thomas from the mega group TLC will team up with actor, dancer and choreographer Harry Shum Jr (Glee) and visual and concept designer Michael Curry (The Lion King and Cirque De Soleil’s LOVE). The show will debut on Monday October 27th, 2014 on TRu TV at 10pm. Check your listings to see what channel Tru TV airs on in your area.

Flipz has toured the world with top International music Icons, acted and danced in every major dance film in the past decade, and founded one of the most elite B-boy crews in the world, the internationally recognized, Skill Methodz Crew. Flipz continues to act in films, on the stage, perform and create for a host of commercial work. With his infectious positive energy, endless creativity, and a commitment to excellence, it didn’t take long before he began to be looked at as more than just an amazing dancer but as a key collaborator and creative that is an asset to any project. As the Founder/President and creative mind behind Flipz Entertainment he also heads up the Artists Development department of his company looking to mold talent into not only triple threats, but quadruple threats in entertainment. Having built his career on his unique style, inventiveness, and out-of-the-box thinking, Flipz has kept that same spirit of creativity and passion while moving behind the camera to choreograph, cast, and produce.

Management: Daniel Sladek at  www.danielsladek.com
You can also view Flipz at:
www.facebook.com/FlipzEntertainment
www.facebook.com/IvanFlipzVelez
For info. on Fake Off and to meet the entire cast go to  http://www.trutv.co
For interviews and media requests contact Neil Cirucci PR at 609 513 1689